March on over to the Uxbridge Music Hall for two great shows you won't want to miss. 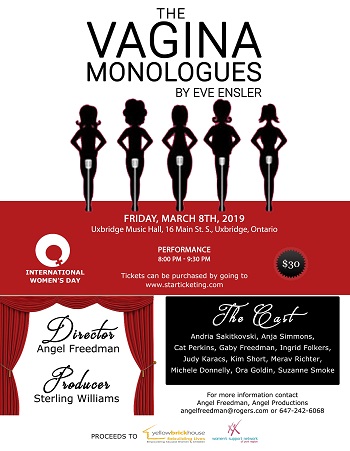 The Vagina Monologues revolutionized the world after it began in 1996, when Eve Ensler interviewed 200 women about the details of their feminine experience; anecdotes about sex, relationships, attraction, and sometimes violence. Eve turned these women's stories into a one-woman-monologue off-Broadway show, and from there it spread like wildfire.

The run away success of that show spurred many more productions around the world, with ensemble casts - often starring and supported by celebrities and notable activists.

Eve Ensler started The V-Day movement, which is a global activist initiative to end violence against women and girls. All the proceeds from every performance of The Vagina Monologues goes to support women's causes, centres and shelters within the community. This years show proceeds will be donated to Yellow BrickHouse and the Women’s Support Network of York Region.

The 8 amazing women in this cast, comprised of local business owners, activists, authors, mothers, daughters, and talented performers, are all honoured and inspired to be a part of this production. The Vagina Monologues directed by Angel Freedman has been performed at The Flato Theatre in Markham as well as The Al Green Theatre in Toronto - mesmerizing audiences and receiving RAVE reviews. This years performance welcomes 6 new cast members and Producer Sterling Williams. The play takes place at The Uxbridge music hall on Friday, March 8. Tickets can be purchased at starticketing.com

All tickets are $30.00 and include all ticket fees, Music Hall Improvement Fund and taxes.

For over 30 years, The Fabulous Thunderbirds have been the quintessential American band. The group's distinctive and powerful sound, influenced by a diversity of musical styles, manifested itself into a unique musical hybrid via such barnburners as "Tuff Enuff" and "Wrap It Up." Co-founder Kim Wilson, the sole original member, still spearheads the group as it evolves into its newest incarnation.

"We started as a straight blues band," vocalist and harmonica player Wilson says. "We now incorporate a mixture of a lot of different styles. We're an American music band and we're much higher energy than we were before."

In addition to Wilson, the current Thunderbirds line-up features Jay Moeller on drums, Johnny Moeller and Mike Keller on guitar, and Randy Bermudes on bass.

"To be in the T-Birds, you need to understand the different styles of music and different ways of playing," Wilson comments. "You have to be willing to adopt a more contemporary style. The guys we have now are able to do that." The band continues to tour extensively, in both the U.S. and Europe.

The thread throughout the T-Birds career has been the respect the group commanded for its peerless musicianship and devotion to the sounds of blues, R & B and rock 'n roll. In fact, Muddy Waters called Wilson his favorite harmonica player and vocalist. "Muddy Waters was very good to me," Wilson says. "He almost adopted me. I'll never forget him."

All tickets are $99.05 each including all taxes, ticket fees and Music Hall Improvement Fund.

Other great shows coming to the Uxbridge Music Hall after March include: A Funny Thing Happened On The Way To The Forum, uxperience: Ux-Tra Ordinary People, Newsies, Cranial Crash & Epic Party, Brass Transit, and The Last Waltz.  Check out these great shows and others!

Make it an evening with dinner and then theatre by visiting one of the many great eateries in Uxbridge including: Urban Pantry, The Tin Mill, Hobby Horse Arms, The Passionate Cook's Bistro and many others.